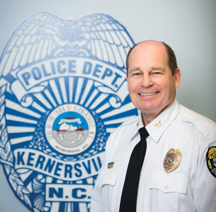 When Scott Cunningham was 10 years old, he saw his kid brother, Chris, accidentally run through the sandbox at recess.  Without realizing it, Chris had destroyed an older boy’s sandcastle.  Surprised and angered, the older boy began to aggressively push Chris.  Scott stepped in and a fight ensued.  The next thing Scott knew, he and the other boy were getting a paddling from the principal.

“The principal told us that we were both wrong.  We needed to find a better way to solve our problems,” Scott remarked.

Scott looked for a better way.  After completing high school, Scott pursued a law degree.  However, after taking a required criminology course, Scott realized that his true calling was to be a police officer.  As an officer, he could not only protect—he could also prevent harm to others.

Today, Scott Cunningham is the new Chief of Police in Kernersville, having been sworn in on July 1, 2013.  Bringing with him 33 years of experience and over 6000 hours of professional training and a PhD in Adult Education/Organizational Management—Chief Scott Cunningham still retains a “hometown” style of policing.

“Our job—our honor—is to serve our community; and Kernersville has high expectations for service.  I would say that Kernersville is the ‘poster child’ for community policing.  We demonstrate what a police department can be for its citizens,” Chief Cunningham said.

One service is free “unlock” for anyone within Kernersville’s city limits.  So when Angie Creed’s three-year-old son accidentally locked her keys in the car, a Kernersville Police Officer came to the rescue.  However, when this was repeated in Winston-Salem, it was a different story.

“I was in their city limits, but the police said that they did not have the time or the manpower to help.  They said they did not offer that service anymore,” Angie said.

Chief Scott Cunningham, who retired as Chief in Winston-Salem, explained, “Most agencies across the nation have evolved to investigating, law enforcement, and call response.  They have had to drop their other services just to keep up with their workload.  But here in Kernersville, we have held on to and have actually grown our services to our citizens.”

One of the most promising areas of growth is Neighborhood Watch.  As implied in the name—neighbors formally agree to watch out for each other and report anything unordinary or suspicious to the police.

Naomi Harry, Watch Commander at Wyndfall Subdivision said, “You keep your eyes and ears going so you can watch out for your neighbor.  We also alert our neighbors when there are break-ins or vandalism.”

Last year, over $1000 of damage was done to Wyndfall’s park over the course of several weeks.  Even though the Kernersville Police Department (KPD) regularly sent patrol cars, it was a neighbor who saw the teens, made the call, and helped the police resolve the problem.

Naomi feels that Wyndfall’s Neighborhood Watch has now prevented many crimes because Wyndfall has built a reputation.

“The word is: ‘Do not go in there because you will get caught.’  I programmed 996-3177 into my cell phone and when I walk my dog and I see suspicious cars, or anything unordinary, I call the police right then.  The police are very responsive,” Naomi assured.

Chief Scott Cunningham wishes that everyone would program 996-3177 into their cell phones.  He wants a call whenever anyone in Kernersville sees something suspicious or questionable.  In fact, having a citywide Community Watch—where everyone feels comfortable to call the police about any suspicion—has contributed to Kernersville’s reputation as crime stoppers.

“Crime can happen anywhere,” explained Mayor Dawn Morgan, “and when it spills over into Kernersville, it is our alert citizens working with our police that help us solve so many cases. That keeps criminals out and gives us all peace of mind when we play at the parks or go shopping with our families.”

It is that hometown peace of mind that Chief Cunningham is intent on preserving.  For him, the answer once again lies in prevention.

“When a home is broken into, it destroys trust and shatters peace of mind.  The victim is always wondering, will it happen again?  Neighbors begin to worry too.  So if we can prevent crime—by being more aware and reporting anything suspicious—we will preserve our peace,” Chief Cunningham said.

How small of a problem should a citizen report?

“Even if someone is missing a garden gnome, I want him to call and report it.  Sometimes, we notice a trend.  Sometimes, teens are testing the waters and if it goes unreported, things can escalate to break-ins and car thefts,” Chief Cunningham explained.

That having been said, Chief Cunningham is not interested in giving a wayward teen a criminal record.  Instead, his goal is to use community service or other consequences to help get people back on the right path.

Here too, he sees prevention as having real power to change lives.  Specifically for young people, he is very excited about Kernersville Cares for Kids (KCK).  This drug prevention program was piloted by the Kernersville Police Department in 1998 and it has built a nationally recognized trust and partnership with Kernersville’s youth—the community of tomorrow.

In large measure, the reason why Kernersville has so many wonderful free programs such as Vacation Watch (within city limits police will drive by your home and walk your property when you are out of town at no charge), AED (Some patrol cars are soon to be equipped with Automatic External Defibrillators to respond to cardiac or other emergency calls), and Funeral Escort (KPD stops traffic and visibly honors the funeral procession), is because this town invests in its police department.

Having an ample police force gives Kernersville’s police time to build close relationships with the citizens, and to serve as protectors and friends.  This value of “hometown” policing drew Sgt. Derrick Crews to the ranks.

“When I worked for a larger agency,” explained Sgt. Crews, “there was no time to build relationships with the citizens.  But here in Kernersville, that is part of my job description.  I love speaking in our clubs and to Cub Scouts to get to know our people better.  Once they know us, ordinary people tell us what is going on.  That is key to keeping Kernersville safe.”

Chief Cunningham has also taken a second look at traffic violations—in keeping with the spirit of treating neighbors the way that we want to be treated.  Anyone can make a mistake.

So, he has told his officers, “When you see a violation, make the stop and talk with the person.  If a warning will suffice, always try to go with a warning.  But, if the violation is critical or if the person has already had warnings, then you will have to write a ticket because we need to keep the streets safe for everyone.”

However, even though the KPD is holding on to “old-fashioned” values of service and neighborliness for its citizens, it has advanced capabilities to protect and defend the town.  KPD has one of the most up-to-date communication and radio systems in the area, allowing it to network with other departments in the event of regional or national threats, a fully trained and equipped SWAT team, and a virtual small army of 63 sworn officers prepared to protect their hometown.  KPD is also gearing up to allow citizens to report crime more easily via text, video, or messaging.

Appreciating all the aspects that make the Kernersville Police Department so admirable, Chief Scott Cunningham concluded, “My whole career has been leading up to this point.  All of my experiences and all of my desires to serve and prevent harm are being fulfilled in this opportunity with the Kernersville Police Department.  I just hope my home sells quickly so that my wife, Amy, and I can move our family here as soon as possible.”

Award-winning author/writer Patty Jo Sawvel, lives in Kernersville and can be contacted at pjsawvel@gmail.com.